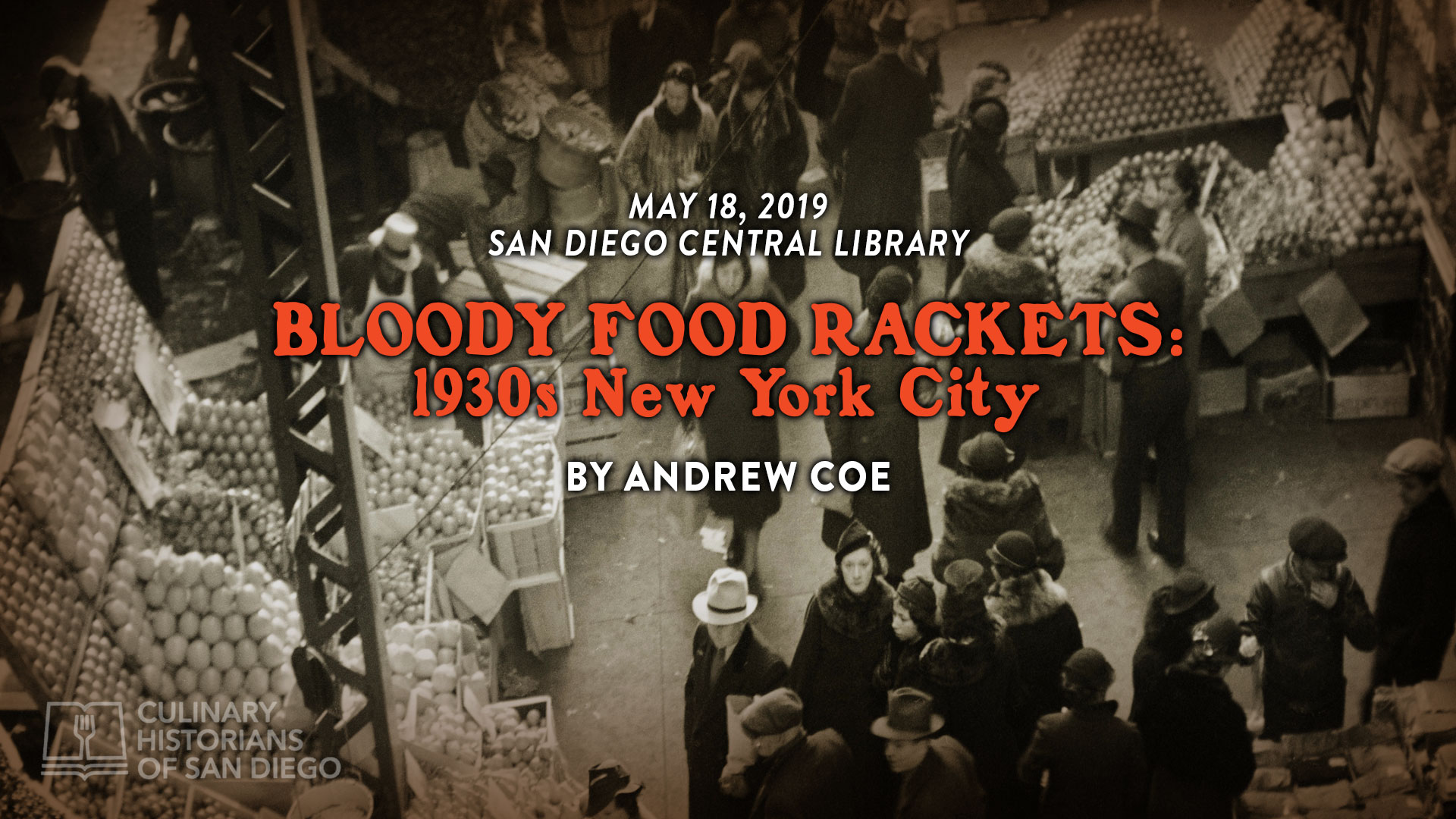 The Culinary Historians of San Diego present “Bloody Food Rackets: 1930s New York City” featuring James Beard Award winner Andrew Coe, at 10:30am on May 18, 2019, in the Neil Morgan Auditorium of the San Diego Central Library, 330 Park Boulevard, San Diego. The event is free and open to the public. A tasting and book signing will follow.

Coe will delve into why notorious gangsters such as Joseph “Socks” Lanza, fought bloody battles over… artichokes, and milk, eggs, flour, kosher chickens, and even chocolate syrup. The setting was the city’s sprawling food markets and the victims were average New Yorkers who struggled to feed their families in the Depression-era economy. The hero was Mayor Fiorello LaGuardia who fought to free customers from the stranglehold of the mob.

About Andrew Coe
Andrew Coe is a writer and independent scholar specializing in culinary history. He and his wife, Jane Ziegelman, are co-authors of A Square Meal: A Culinary History of the Great Depression, which won a James Beard award. His ground-breaking Chop Suey: A Cultural History of Chinese Food in the United States was a finalist for a James Beard award and named one of the best food books of the year by the Financial Times. He has written books, articles, and blog posts on everything from the ancient history of foie gras to the secret criminal past of chocolate egg creams, to where to buy the tastiest bread in New York City. Coe has appeared in documentaries such as the National Geographic Channel’s “Eat: The Story of Food” and “The Search for General Tso.”

from May 18, 2019 meeting.Based on Sharon’s grandmother’s recipe from the Depression and World War II, when there was a shortage of eggs.

1. Mix sugar, molasses, butter, water, raisins, salt, cinnamon, cloves, and nutmeg in a saucepan. Bring to a boil for 3 minutes, then let cool for 1 – 2 hours, until lukewarm.

3. In a large mixing bowl, whisk together flour and baking powder. Stir in sugar and spice mix from saucepan. Mix in walnuts.

4. Pour batter into a greased tube pan. Bake preheated 350˚ F oven for 50 minutes. Then, lower temperature to 300°F and bake for another 10 minutes or until a cake tester (skewer) comes out clean.

Cool cake in pan on a rack for 10 minutes, then remove from pan and cool on a rack before cutting.